I picked up a newspaper the other day–hah! No, I didn’t. This is 2016, not 1996, and I’m not some time traveling cyborg, wandering around reading newspapers because I’ve been sent back from the future to prevent a horrific tragedy from destroying our country.

Would that I were.

No, this is what I really did the other day: I scrolled through the news feed on my robot phone and discovered that here in the United States we have a presidential election going on.

I imagine that’s the same question more than a few of you have been asking yourself as we wind our way through this very strange political season. 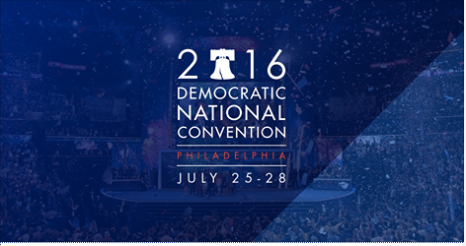 Here in Philadelphia we’re ramping up for the 2016 Democratic National Convention, slated for the Wells Fargo Center on July 25-28.

If you head over to the Democratic National Convention website you can find out all sorts of interesting things, including how to request media credentials, although the deadline has passed, so it looks like I am SOL. Had it occurred to me before the drop dead date (whenever that was, the website doesn’t bother to say, sorry not sorry), I can’t imagine my request would have been successful.

An Overworked DNC Volunteer: Got a request from some blogger for media credentials. Can you look up Do Not Get Sick in the Sink, Please?

Another Overworked DNC Volunteer: Here it is. It says it’s about “Humor and Sex. Mostly Sex.”

Another Overworked DNC Volunteer: Nah, doesn’t look like it. Posts about how to get rid of ants in your kitchen. And orangutans. Here’s one about a ham and cheese sandwich.

Overworked DNC Volunteer: None of that sounds political. So, no politics, and no dirty pictures. What’s the point of that blog?

Other Overworked DNC Volunteer: Who knows? Just stamp that request “rejected” and let’s move on.

Overworked DNC Volunteer: Ok, here’s the next one. Look up Nigel and His Naughty Friends for me . . .

As I clicked around the Democratic National Convention website, I wondered about the state of American democracy. Then it occurred to me that the political convention, scheduled to take place so close to home, provided yet another “teachable moment” for my two young daughters.

I ran the idea past my husband.

“What do you mean?” he asked, his voice cracking as beads of sweat broke out on his forehead. He’s heard my ideas before, like the time I wanted to learn a foreign language and made him watch an entire season of Friends in Spanish (¡El Uno Donde Ross y Rachel se rompen!). Or that time I suggested we raise chickens, if he was willing to wring their necks (he wasn’t). Or that other time I wanted to try anal sex (in the end, I turned out to be unwilling). “You’re not going to ask me to dress up like Hillary Clinton, are you?”

No, I assured him, my plan did not involve any cross-dressing (at least, not this plan). Instead, it involved ordering a pizza and sitting around the dining room table, explaining to the girls the role political conventions play in American democracy.

“We’re going to play a sort of game,” I said as I passed out slips of paper. “This will be fun.”

“That’s what you said about the play with the people in that room,” my older daughter said without looking up from her cell phone. Last year, I’d bought season tickets to a community theater that chose to perform, alongside Charlotte’s Web and Bye Bye Birdie, Harold Pintar’s The Room. “I had nightmares three nights straight.” 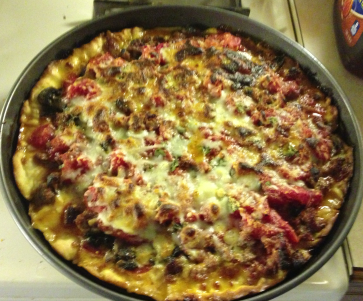 “That’s right,” the younger one said. Right now, she’s more focused on decontaminating her pizza from the scourge of sliced green peppers than what we’re discussing. “You told us that would be fun, too.” She flicked away a piece of the offending vegetable. “But it wasn’t fun.”

“This is different,” I said, although who can be sure the political conventions won’t resemble an absurdist drama?

“It sounds like fun to me,” my husband said. He finds it easier to support my ideas when they don’t involve embarrassing him. “What do we do?”

My husband already knows what we’re going to do because I briefed him about it last night in bed, elbowing him awake to explain it all, so my instructions were for the benefit of the girls.

“This summer, the two political parties are going to hold their conventions. The Republicans will get together in Cleveland, and the Democrats are meeting here in Philadelphia. They’re going to pick their presidential candidates, and they’re also going to vote on their party platform.”At this point, I held up my slip of paper. “And that’s what I’d like to do. Create a sort of family platform.” I chose a pencil from the pile collected at the center of the table and pantomimed writing on the paper. “For example, I could write ‘Respect One Another’ because that’s important to me, and it’s a goal I believe we should all work toward in this family, so I want that to be part of our platform.” I put down the pencil. “After everyone fills out at least one slip of paper, we’ll vote on which ones we want to include. That’s called ‘adopting’ or ‘approving’ the platform.”

My younger daughter’s hand darted across the table to grab a pencil. “I’m voting for Trump!” She plays the trumpet in the elementary school band and somehow the presumptive Republican nominee’s name and her musical instrument have commingled in her brain and turned her into a vociferous supporter.

I wrestled the pencil from her grasp. “We’re not voting for the candidates. We’re trying to create a platform, the things we believe in, as a family, just like the political parties will at their conventions,” I explained, again.

“And if we were voting,” the thirteen year old looked up from her phone long enough to cast a withering glance at her younger sister, “we’d vote for Bernie, not Trump.”

My husband coughed. When I met him, he was a registered Republican. Six months later, he told me he had switched party affiliations (to Independent, but still . . .). I think that meant more to me than when said he loved me.

“I don’t know if we’d all vote for Bernie, but definitely not Trump,” I said. “And if you keep saying you’re voting for Trump, you’ll be playing the flute next year. Is everybody clear on what we’re doing?”

They nodded, except the thirteen year old, who put down her phone and picked up a pencil in silent acquiescence. I set the kitchen timer for five minutes.

Five minutes later, I collected the slips of paper and read them out loud.

“‘Respect One Another,'” I read. That one was mine.

I picked up another slip of paper. “‘Tolerate Different Opinions.'” I recognized my husband’s hand writing, and suspected this is his way of telling me he’s voting Libertarian in the fall.

The next slip of paper said, “‘No Green Peppers.'” I looked at my younger daughter. “Really?” She nodded. “Green peppers are good for you,” I said. “I don’t know if I can support ‘No Green Peppers’ as part of the family platform.”

Finally, I came to the last one. “‘Moratorium on All Mom’s Fun Ideas,'” I read aloud.

As with much of what my older daughter says and does these days, I had mixed feelings. On one hand, I’m disappointed that she doesn’t enthusiastically support family activities the way she did when she was younger. On the other hand, I’m really proud that she knew how to use the word “moratorium” correctly in a sentence.

In the end, I kicked them all out of the dining room and told them they didn’t deserve a democracy, let alone pizza, and we’d all be supporting Hillary in November, or else.

And you are, too, goddammit.

The image of the DNC logo and the “I’m With Her” button come from their respective websites and are believed to comply with the Fair Use doctrine. The picture of the pizza is my own, and so is the pizza. It’s my attempt at a Chicago style deep dish from a few years ago, back when I had time to cook and write blog posts, too.

35 thoughts on “The Mother of Convention”