Right now, attorneys are drafting a Cease and Desist letter with my name on it.

Yesterday, in Part I of Why That Sucky Blog That Sucks Has More Followers Than You Do, I made you all quite a bit paranoid about the readers of your blog by explaining the reasons why people Like/Follow your posts.  Armed with that knowledge, how can we explain the fact that the dumb post that stupid blogger wrote about his dinner at Applebee’s where his wife ordered this dish and he ordered that dish and that was it, goddammit, they didn’t even take pictures of the food, and not one thing happened that was memorable, let alone bloggable, and I just wasted ten minutes of my life reading that post and now oh my God how did this post get 114 Likes and 278 Comments???????

I consider myself to be a member of the Seinfeld School of Blogging, meaning I blog about nothing, so in and of itself a dinner at Applebee’s isn’t automatically disqualified as material for a blog post.  In fact, I envision a future post on this blog about dinner at Applebee’s, because I’ve eaten there (unfortunately), and I’ve rather a lot to say about the experience.  I consider myself to be a bit of a gourmand (or at least a foodie.  Or at least a person who eats), but I’ve decided I’m an abject failure as mother because my daughter wants to go to Applebee’s for her birthday because it’s her favorite.  I blame her father.  His favorite restaurant is Red Robin.

My point is, I don’t think it’s the content of an individual blog post that attracts Likes and Followers, which is why we so often see craptacular posts get a zillion Likes while our best work is ignored.  Think about it.  Isn’t there a post on your blog that got a ridiculous amount of Likes for no reason that you can fathom?  Here’s mine: What If You Had to Marry the First Person You Had Sex With.

Instead, I think we can attribute these mega-Like posts to the following:

So there you have it.  Those are the reasons Why That Sucky Blog That Sucks Has More Followers Than You Do.  I wonder if WordPress has any more questions for me to answer . . .

You can join me in mocking Applebee’s with images, like the one in this post, from their media page, Applebee’s newsroom.

Yesterday, the Daily Post asked a question that I often obsess over:

I’ve considered this very question before in Why I Stopped Liking Your Blog Posts, but I continue to wonder about it.

For the record, Do Not Get Sick in the Sink, Please is rapidly approaching 1000 followers, numbers which have been buoyed by a sudden and surprising popularity in Jakarta, a place where everyone seems to be inspired to blog about generic Viagra.  I guess “Viagra Blogs” are their version of “Mommy Blogs”.  Anyway, I can’t complain too much about my Jakartan followers because at least they speak English, and I guess I can imagine someone there maybe making sense out of a post like Let Go and Let God (Find You a Date for Saturday Night).  However, I reserve the right to continue to be suspicious of the mass of followers I’m accumulating in the smallest country in South America, Suriname (pop. 560,000–there are more people living in Vermont), where the official language is Dutch.

In order to answer the question posed by the Daily Post, first we have to understand the different types of Likes and Follows on WordPress blogs.

So there you have all the different types of Likes/Follows.  In tomorrow’s post, Why That Sucky Blog that Sucks Has More Followers Than You Do, Part II, I’ll discuss why those other bloggers are getting so many Viagra Bloggers, as well as some genuine, real life people, to Like/Follow their blog, even though it sucks.

This post has been edited to add the Daily Prompt for today, coincidentally enough:

If you could get all the nutrition you needed in a day with a pill — no worrying about what to eat, no food preparation — would you do it? 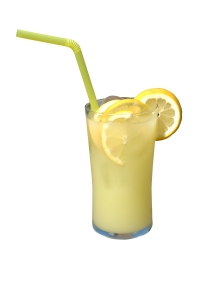 Maybe it will taste better with a slice of lemon in it.

I have to wonder if Rob Rhinehart, the man behind the “food of the future,” Soylent, has the same attitude about sex as he does about food. According to the software engineer/food hater, food (or maybe more precisely, shopping and cooking) is a “hassle” which can be avoided by limiting your diet to his creation, Soylent.  What is Soylent, you ask?  Here’s an explanation from the crowdfunding website  for the powdered drink mix that promises to “Free Your Body.”

What if you never had to worry about food again?