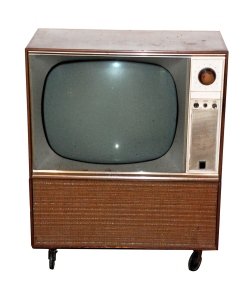 The way we used to watch television

I’ve stopped watching television. No, I haven’t turned into one of those people who chucks their TV out the nearest window and then loudly proclaims to anyone who will listen that I don’t even miss it, really, I don’t, and, anyway, I have so much more free time now, that’s, you know, free, instead of sponsored by Stains Be Gone! laundry detergent (or whatever). Instead, my television viewing, like so much of my life, has become a matter of semantics: yes, it’s true, I no longer watch television; now, here in the 21st century, I stream it.

As we do here in the future, I subscribed to the British television streaming service Acorn TV, which should not be confused with the Acorns micro-investing application, although icons for both appear on my iPhone. Let’s hope I never mix them up and lose 43¢ in the stock market when I just want to watch The Great British Bake Off. 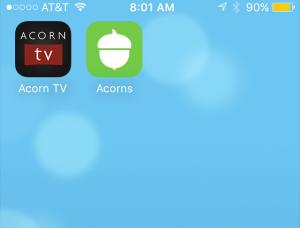 I’ll stop here to say I continue to be gobsmacked by how rapidly technology is changing our lives, and how different my kids’ childhood is from my own: today, there is no gathering around the television on Sunday nights to watch, say, 21 Jump Street, just like there are no report cards brought home to be signed by proud/disappointed parents. Report cards still exist but only in electronic form, transmitted through the atmosphere to something called the Parent Portal on the school district website, which is as science fiction-y as it sounds. Shows like 21 Jump Street are still produced, I guess, but my kids are too busy following YouTube stars on Instagram to gather around the television. They know they can always catch up with television shows any time On Demand.

OK, Luddite rant over, let’s get back to Acorn TV.

If you go to Acorn TV’s website, you’ll see they promise all the best of British television, and I like British television–or so I assumed from years of watching PBS– and the subscription was free, and I thought, why not? So I signed up.

But the thing is, what PBS has been feeding us all these years, it’s not even British television. For example, the show Downton Abbey–did you know it’s only half British? The series is produced in a partnership between Carnival Films, which is based in London, and Masterpiece, the production company of WGBH, a Boston based television station that is responsible for more than two-thirds of PBS’s national programming.

(And, while we’re taking the credit for half of Downton Abbey, we Americans can also claim half of Winston Churchill, whose mother, Jenny, was born and raised in Brooklyn).

Can you believe it? Most of PBS programming isn’t British at all–it’s as American as, well, Winston Churchill! But all these years they’ve been leading us to believe with their fancy accents, and their fancy manor houses, and their fancy Marmite, that they’re British!

Now that I’m watching 100% British shows on Acorn TV, I can understand why television executives might want to add a bit of American before broadcasting here. Do you know that old joke about the US and Great Britain being separated by a common language? Tune into an episode of Vera, a crime drama set in the north of England, and try to follow the action without turning on the closed captioning.

Here’s another obstacle UK shows face in getting on US television: the gross error in nomenclature you may have noticed in the title of that video clip, “Vera, New Series.” Over there, they call each new batch of a particular show a series instead of a season, as we Americans do, and (I’m sure) God intended. Vera is not, in fact, a new television show at all. It’s been airing since 2011, and that video clip is promoting the 2015 season of the show. I don’t know how they got this wrong, but I suspect it’s somehow related to all those unnecessary U’s they insert all over the place. Regardless, it’s an absolute deal breaker for me as I’m too old and too easily confused to call anything other than what I’ve always been calling it, which is why I’ve owned a succession of cats all named Mitzy.

If you haven’t been dissuaded by that series/season thing and you still think you want to watch Vera, I’m afraid the only way you can is with a subscription to Acorn TV. Alternatively, you could move to the UK and watch it there. Without considering the (possibly prohibitive?) relocation expenses, that option will cost you, as well: the Brits have this thing called the television licence fee that’s collected by the BBC to fund television, radio and online services. That will run you “£145.50 for a colour and£49.00 for a black and white” which pays for all the fancy costumes and cases of Marmite, I suppose.

As for Downton Abbey, you can watch the sixth and very last season on Sunday nights on PBS. Check your local listings. Or don’t. I’m sure you can watch it On Demand any time. Or stream it through your robot phone, if you want.

Royalty free stock photos including an image of the old TV can be found at freeimages.com. The screenshot of my phone is my own.

8 thoughts on “The BBC in the USA”