Like a railroad train bearing down on me in an episode of a silent movie serial, my wedding anniversary is fast approaching.

I’ve long struggled with what to give my husband for our anniversary and find myself consulting those lists of traditional gifts each year.  You can find out what you’re supposed to give (or get) every year here. For those of you who don’t know how the internet works, I’ll provide the list for the first ten years of marriage: 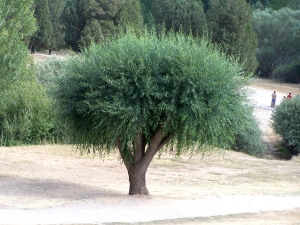 How am I supposed to wrap this?

Looks like last year I was supposed to give him a piece of pottery or a willow.  A willow?   Yes, a willow.  I wonder if that means the tree or the film?  I guess it doesn’t matter since we both forgot our anniversary last year.  About a week later I finally remembered that I’d forgotten, but since he didn’t even remember that he forgot, I decided to save this bit of information to use against him in our next argument (“Not only did you leave the toilet seat up, but you forgot our anniversary, you bastard!”)

So this year it looks like I’m supposed to give him something made of tin.  Amazon.com suggests the “luxurious” Bentley’s Finest Tea Classic Collection Tin Gift Set (certified Kosher!), as well as tin cufflinks and a photo frame (“Cheap looking and definitely not what was expected” writes one disappointed purchaser).

I guess any of those ideas would be better than what one Pennsylvania couple decided to do together to commemorate their three-week (here I am, worrying about what to give for ten years of marriage while other couples celebrate their marriages as a weekly event!) anniversary.  From the NY Daily News:

They celebrated their three-week wedding anniversary and Veteran’s Day by killing a man for the thrill of it, according to police.

Elytte Barbour, 22, and his 18-year-old bride, Miranda, are charged with murder for the Nov. 11 killing of Troy LaFerrara, 42, a man who answered the woman’s Craigslist ad offering companionship in the form of “delightful conversation.”

I’ve warned you all about Craigslist before in the posts You Really Can Find Anything on Craigslist, Adventures in Babymaking and Too Stupid to Live but I guess poor, doomed Troy LaFerrara was not a follower of Do Not Get Sick in the Sink, Please . Let his life (and death) be a lesson to you all to keep on following my blog.

As if murdering a stranger off Craigslist to celebrate your anniversary isn’t shocking enough, Mrs. Barbour is now claiming to be a mass-murdering Satanist.  Because, you know, why not?  I’m sure she has nothing better to do than think up crazy bullshit while lying around her cell waiting for trial.

As for me, I’m lying around wondering if it’s too much to hope my husband will forget about our anniversary again this year.

Royalty free stock photos including the image in this post can be found at Stock.XCHNG.