I’m watching you and your blog.

I read your blog.  You may also have noticed that I occasionally comment, and, less often, I even Like one of your posts.  But rest assured, I’m always out there, reading your blog.

I was doing just that yesterday, innocently reading this post, Is Quiet Feminism an Oxymoron? over on the Green Study, which included a link to another blog, The Outlier Collective.  At the Outlier Collective, I read the post, 10 Signs that Feminism May Not Be For You, and down the list, I came across the seventh sign.

7. You ever, ever, ever feel the need to clarify that you’re not one of those feminists.

This is code for, “But I don’t hate men! I don’t wear cargo pants [emphasis added]! I shave my legs! I promise!” And for sure those statements are true for many feminists; in fact, none of us hate men. But by distancing yourself from those feminists, whoever those feminists are, perpetuates the idea that a) there’s something wrong with those feminists, b) those feminists are totally threatening to men and masculinity, and c) that they make up the majority of the feminist movement.

Remember how we were talking earlier about feminism being all about choice? Well, it’s a two-way street, my friend. You can choose to wear your lipstick and your Peter Pan collar, and another woman can choose to wear hiking boots and a baseball cap [emphasis added], and at the end of the day, both of you are awesome feminists.

At the exact moment I was reading those paragraphs, I happened to be lying on the sofa in my living room wearing (get ready for a shocking revelation) 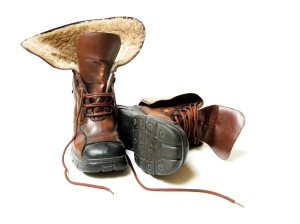 Lace these up and immediately feel the urge to munch carpet.

So I read that post, and I immediately thought, “OMG!  I’m one of those feminists.”  Before, I had just thought I was a feminist, but, as it turns out, I guess I’ve been wrong.  On account of the cargo shorts and the baseball cap, you see.  I even own a pair of hiking boots, now that I think of it, because I tried to convince my family that one time that we could be “outdoorsy.”

Then it occurred to me that I’m not actually one of those feminists, I’m just lazy.  My hair had dried funny after I showered, and I didn’t feel like fixing it, so I was hiding it under the baseball cap, and I was wearing the cargo shorts because wearing something else would have required me to do a load of laundry.

So, in conclusion, let me blow your mind by stating for the record that I am one of those awesome feminists who shaves her legs, likes penis, cargo shorts, and baseball (not necessarily in that order).  And when you see me out in public wearing cargo shorts and a baseball cap, you should think, “Jesus Christ, that woman is so lazy.”

You can read more about leg shaving and lesbians in these posts Shining, Gleaming, Streaming, Flaxen, Waxen, Turns Out Ellen Degeneres is Not the Only Lesbian in the World, and What A Pathetic Lesbian I Would Be.

Royalty free stock photos including the images in this post can be found at Stock.XCHNG.